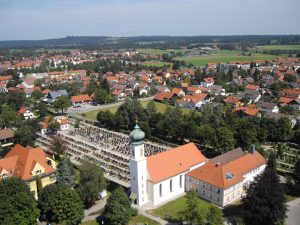 The history of the church Wallfahrtskirche Maria unter der Egg dates back to the mid seventeenth century. The long historical origin of the Wallfahrt began in 1645: Tailor Lorenz Ette erected a masonry wayside shrine in the Peiting area. According to Wallfahrt legend – due to severe heart pain – he heeded the warning of his ancestress to put up a picture of the Virgin Mary. After erecting the shrine, his suffering ended. The first pilgrims arrived soon after and the first miracle stories tell of the immediate adoration of the shrine. From 1650 an attempt was finally made to build a chapel around the shrine. The building work continued until 1658. Due to the growing pilgrimage, the church had to be expanded around 1737: a pulpit, a group of crosses, two side alters, a main altar, a panel of Jacob’s Brethren and a relief Adoration of the Magi were all put in place.

The stucco in the choir and nave is ascribed to the workshop of Johann Schmuzer from Wessobrunn. The votive paintings provide evidence of a strong popular devotion and belief, and were once part of a large collection from which only a few, albeit very important examples, were preserved. The most important panel, that of Jacob’s Brethren, is not to be missed on a visit to the church.

More information can be found on the homepage of the Parish of St. Michael:  www.st-michael-peiting.de